So a while back, I posted a Victorian photograph of who I thought were the Maggios. It recently came to my attention that the couple pictured was actually John and Anna Schaffer. Here is that photo again: 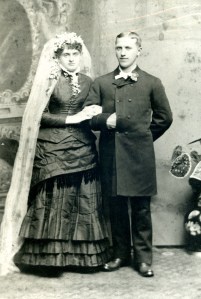 One of my favorite things to do is to try and date photos. If you have a good knowledge of historical clothing and context, this can be relatively easy, depending on what garments and hairstyles those in the photo are wearing and the event that is pictured. I have a degree in costume design, so I have a passion about historical clothing.

This is one of my favorite photos, and probably the oldest my family has. Judging by the clothes, we can determine it falls into the late Victorian era, specifically the bustle era, the 1880s. It is clearly a wedding photograph, with the bride wearing a long veil. While Queen Victoria did make it fashionable to wear a white wedding dress, many women still wore the customary dark dress. This was a practical choice – their best dress, if dark, could be worn both at their wedding and when in mourning (plus, my personal opinion – it hides dirt better). The groom is wearing a typical Prince Albert coat of the period. 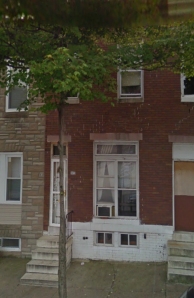 John G. Schaffer was born on December 29, 1858 in Baltimore, MD to Bavarian immigrants Gabriel Schaffer and Julianna Walgardt. For most of his life, John was a cobbler.

Anna M. Davidson was born on November 9, 1864 in Baltimore to Samuel George Davidson and Mary Jane Pow/Powell (not sure which is the correct last name). Before marrying John, her occupation was listed as a seamstress. 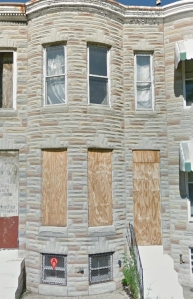 They were married in 1884 at St. Paul’s Catholic Church. Together they had four children: Mary Jane, Elizabeth, Francis X., and an unknown child who died before 1900. They raised their family in various homes on the 1800 block of Harford Avenue.

Anna passed away first on September 29, 1930. John died four years later on September 3, 1934 succumbing to injuries inflicted after being hit by a car eight months previously. Both are buried at Holy Redeemer Cemetery in Baltimore. 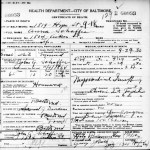